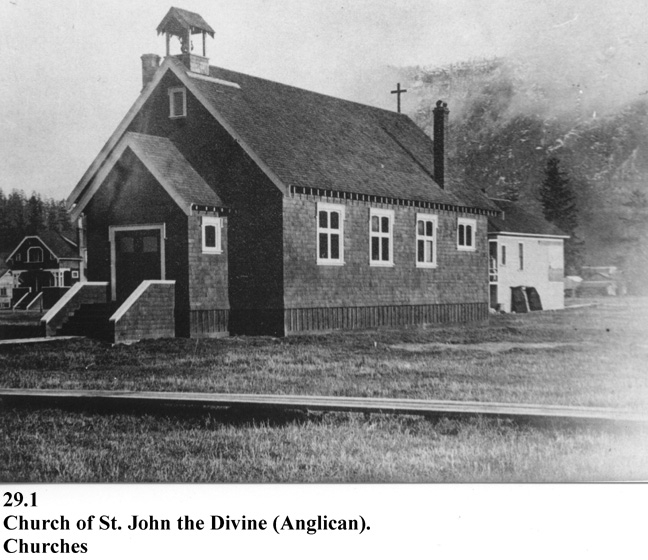 There has been a continuing Anglican presence in the Squamish area since the late nineteenth century when settlers were arriving to farm the land. Many settlers were of British descent and being able to worship here was key to their staying. In 1894 Miss Anne Barbara Edwards (later Mrs. Harry Judd) began a Bible Study class on Sundays.

In 1912 the Rev. Allan Greene began to minister in Newport (Squamish) and Brackendale every two weeks, arriving at the dock in his mission boat, “Eirene”, and traveling north on horseback or railway handcart. With his help the settlers were able to raise $1,000. and procure a piece of property donated by the new Pacific Great Eastern Railway, as well as a loan from the Diocese of New Westminster in order to build the church of St. John the Divine on 6th Avenue, completed in July of 1913. The little 25’ by 50’ church building served St. John’s for many years until the Garibaldi Highlands began to expand. In 1965 Mr. Pat Goode donated a piece of property in Garibaldi Estates where a rectory was built, followed by a church hall in 1976 which was used as church sanctuary and hall for the next 24 years. This central location became the home of our current sanctuary built in 2000.

Over the years there have been scores of faithful Anglican lay people and clergy who have ministered to folks living in the Sea to Sky corridor, from Woodfibre to Pemberton. We plan to celebrate the rich heritage of these ‘saints’ past and present throughout the last century in our centennial year of 2013.

Clergy at St. John the Divine

Anglican ministry began in the Squamish area in 1894 when Miss Anne Barbara Edwards (later Mrs. Harry Judd) began the Squamish Valley Bible Class.  The Sunday afternoon meetings were held at the Public Hall and sometimes in private homes.  Meetings included prayer, scripture readings, hymns and discussion; usually led by lay people as few clergy made it up to Squamish (formally Newport) in those days.  Mr. William Mashiter was very instrumental in the formation of St. John the Divine.

The following is a list of clergy who have lead us in worship over the past one hundred years:

History of the St. John Divine parish – written by William Mashiter, circa 1925

In writing I have confined myself to the Squamish Valley although in the early days services were held at Britannia Beach and Woodfibre, but were dropped when the war (WW1) came, resumed again when Rev. H. Green took charge.  Another thing which I think ought to have a place is that the ladies of the church have built a vicarage, kept the church in repair and both are now free of debt and in good order.

First religious service held in the Squamish Valley, was in the year 1891 when the Rev. Manual, a Methodist Minister, rowed up from Gibson’s Landing, some thirty miles off and held a service one bright Sunday afternoon in one of the settler’s homes.  I do not remember any other religious service till May 6th, 1894 when Miss Edwards, now Mrs. Harry Judd, organized a Bible class.  These classes were held in the school room.  Each Sunday, Miss Edwards would appoint one of the settlers to lead the meeting on the next Sunday.  Hymns were sung, prayers offered and a portion of scripture read and discussed.  These meetings were well attended, from twenty-five to fourty-four being present.  These meetings were continued till April 1904, when Miss Edwards married.  Miss Judd who played the organ and led the singing had gone to live in Vancouver, and my wife and I spent the summer in England, so the meetings died.

During this time we had a number of services by ministers and students.  Rev. Irwin gave us three services, Nov. 11th, 1894, Dec. 9th 1894, March 10th, 1896;  Rev. Wellington, May 12th and 19th, 1895, and several others whose names I cannot recall.  From 1904 to 1912 we had very few services.  Once in a while a student or minister would visit us and hold service; among others, I might mention, Bishop Dart, who was most anxious to place a man here; and Rev. Robson, one of the pioneer Methodist Ministers of B. C., a student named Braden, a very earnest young man who is now a prominent minister in the United Church, and others whose names I have forgotten.  In 1912 the Rev. Allan Green gave us a service every two weeks.  At this time the railway was being built and things looked well for the Valley.  sever. being present.  This was July 7th, 1912.  In talking the matter of building a church with him, he advised not to build till we had at least one thousand dollars on hand.  Mr. Green at once started collecting and others assisting, we were soon able to let a contract to build the church.  Mr. Green left us in the fall of 1912 and Mr. Baxter took charge, and on July 20th, 1913 the church was opened by the Bishop and two adults confirmed, May 5th, 1913.  First officers were appointed: W. Mashiter, vicar’s warden; F. J. Lawrence, peoples’ warden and F. Buckley, Sidesman.  For some time we had been having alternate services with the Presbyterians, they having services at Squamish one week and at Brackendale the next, we the same, so each place had one service every Sunday, but this year, 1914, the Presbyterians had a student who was a very eloquent speaker, and he told his congregation that he would like to give a series of sermons at Squamish and as he was only up for the summer he could not do so unless he had every Sunday so both churches started having services on June 21st, 1914.

October 11, first marriage in the church, F. Buckley and Miss Galbraith, Rev. Charles Hoyle officiating.  After Sept. 20th, 1914, Mr. MacDougal was only able to give a service every two weeks and services were conducted on alternate Sundays by W. Mashiter, lay reader.  In 1916 MacDougal left us and Rev. H. H. Gillies took charge for the summer.  After this we had very few visits from students or minister, W. Mashiter conducting the service every Sunday till 1919 when Rev. F. H. Buck took charge for the summer, followed by L. Morrant who left us in 1920, when services were conducted for some time by Mashiter; Nov. 21st, 1920 Rev. H. Green took charge.  He left us in 1922 and the services fell largely to Mashiter.  In 1924 our present minister, Rev. Henry Wilson took charge.